Memo of Change in Stormwater Project

Suncrest Neighborhood Association President, Ed Sneckenberger on the front page of the Dominion Post. MUB Searches for solution to runoff. (Link provided with permission by The Dominion Post) 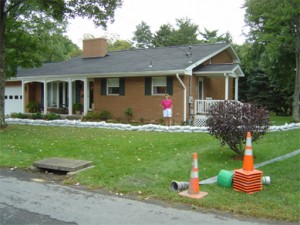 Narvel Weese, Assistant VP for Planning at WVU, shared that WVU will contribute its property and will construct stormwater detention provisions on the property to protect Suncrest from a 25-year rain storm, as required by MUB regulations.

Joe Fisher, Associate VP for Facilities and Services at WVU, described the existing stormwater detention provisions on the WVU Health Sciences Campus, such as the detention ponds near the HealthSouth Rehab Center, as being designed to protect Suncrest against a 25-year rain storm. WVU will pursue detentions that exceed protection of Suncrest from more than a 25-year rain storm. WVU claims that its study of the Strand Report prepared for MUB shows that only 38% (not 46%) of the stormwater runoff in Poponoe Run comes from WVU property. Bob Carubia, Project Planner for WVUH, added clarifications of the stormwater provisions near the NIOSH facility and for new parking lots toward Chestnut Ridge Road.

MUB agreed to raise the size of the basin near the fountains to control 100 year flood at the meeting attended by Stakeholders (City, MUB, WVU, SNA). Although this was approved during this meeting, WVU had second thoughts, recalculated this area, and Alumni Association would like to use some of this green space. We are back where we were with less space than what even MUB proposed for this space which was 11 acre feet. It went from a 28 acre feet to a 9 acre feet, which makes this storm water basin large enough for roughly 25 year flood. MUB’s response is to write a letter to WVU President Hardesty. MUB is writing a letter to WVU to reject this plan.

As noted at the July SNA meeting, concern has been expressed about plans by WVU Alumni Association to build a new Center on the WVU HSC land. Email communications since July with Joe Fisher, WVU VP for Facilities and Services, yielded news that the City/MUB plan for a detention basin on the WVU HSC land had not yet been submitted for approval to the WVU Board of Governors. Don Spencer remarked that Ron Justice, Mayor of Morgantown, has shared his intent to ensure that the detention basin be constructed as part of WVU commitment to the City/MUB stormwater mitigation project for Suncrest.

Report on Stormwater Mitigation Project: Doug Smith, manager of MUB’s stormwater mitigation projects, reported that City Council has approved the MUB Plan to proceed with the Stormwater Mitigation Project for Suncrest that evolved from the Stakeholder Meetings held during the spring. This plan includes an increased detention basin for Poponoe Run from 11ac-ft to 21 ac-ft and an added culvert replacement for Burroughs Run at Woodland Drive. Doug reported that 60% of the hard design has now been completed. The B1 detention basin for Burroughs Run will be a dry pond. The other four detention basins for Burroughs Run (B1x, J D Anderson; B2, WVNET; B7, Rehab; B5, Kiger-Green) will be wet ponds, as will the detention basin (P12, WVU HSC) for Poponoe Run. MUB will secure and maintain these ponds, except for the WVU HSC ponds. Don Spencer and others requested that MUB involve City Beautification Commission, BOPARC, etc to make these basins functional and beautiful. Doug was asked by Gary Rohrssen how much reserve capacity for future HSC growth was included in the 21 ac-ft detention basin. The probable answer is none. In reply to a question by Joe Baniak, Doug responded that the flow channel for Poponoe Run in front of CMA Church will be bigger and more beautiful. Doug replied to a concern of Kay Lotspeich about stormwater drops along Tacoma Street that new ones will be bigger and better. Doug commented in response to an inquiry by Lou Birurakis about the health concern related to stormwater infiltration into the sanitary sewer that this project will not address that issue. Doug added that a rebuild of the sanitary sewer would cost multiple millions of dollars. Doug noted in response to an observation by Jim Culberson about the former Pargos building on Patterson Drive that if the existing building is demolished, then MUB will need to approve the stormwater plan for the new development. The funding aspect of the project is progressing. The WVDEP and WVDOT have committed $250,000 and $300,000 respectively to the project. The WVU in-kind commitment of about $700,000 has not been finalized. MUB has requested donations for the project from nearby businesses such as Mylan Labs and Suburban Plaza, but no gifts have yet been received. Questions with no answers were raised about plans by WVU Alumni Association to build on the WVU HSC land.

Flooding a Continual Problem (Linked with permission from The Dominon Post)

Tim Ball, acting general manager of MUB, met with the SNA. Between February 22 and April 19, interested parties participated as Stakeholders in a review of the design and financing of the stormwater control project for the Burroughs and Poponoe Run watersheds. The Utility Board assigned two objectives for the process: first to evaluate and achieve consensus regarding the project design and second to develop a funding plan for the selected design. The stakeholders group accomplished both objectives. The stakeholders also unanimously recommended that a general stormwater rate increase be enacted to fund the project shortfall. There was discussion about whether the increase should be for residents in the entire system or watershed residents only. Don Spencer suggested that the increase be spread over the entire system and be a bit more than recommended so that there would be a contingency fund for other projects. Several people agreed this would make sense.

The SNA Stormwater Group has been an active participant in the bi-weekly meetings of the Suncrest stormwater stakeholders held at the MUB office building on the Greenbag Road. The SNA Stormwater Group presented an alternative design to the design proposed by MUB for mitigating flooding in neighborhoods near Poponoe Run and Burroughs Run. The main emphasis for these alternative plans is to further reduce flooding in the neighborhood at the lower section of Burroughs Run and in the church-home-business section of Poponoe Run along Patteson Drive.

Draft Minutes of February 22, 2005 Meeting of Core Group with the MUB. Meeting was held at MUB Conference Room starting at 1:30 PM.

Draft Minutes of February 16, 2005 Meeting of Core Group with the MUB. Meeting was held at SMS Music Room at 4 PM.

The SNA Core Group for the Suncrest Stormwater Project met with Doug Smith on Wednesday, February 16, 2005. Doug Smith provided much information and assurance to the Core Group as MUB begins its effort to bring the watershed communities together to seek a consensus as to scope and source of funds for the Suncrest Stormwater Project. Minutes for this Core Group meeting are attached. The SNA Core Group and others then met at the first Stakeholders Meeting held on Tuesday. February 22, 2005. The members of the SNA Group gave very credible input at this meeting about the increasing flooding problems that have existed for too long and expanded too much for both the Burroughs Run and Poponoe Run areas. The next Stakeholders meeting will be Tuesday, March 8, 2005.

Tim Ball and Doug Smith from MUB provided an update on the Stormwater Mitigation Project for Suncrest. An effort to have a record of their verbal remarks and the questions and responses, as well as to thank Tim and Doug for personally attending the SNA meeting, has yielded the attached letter report to Tim and Doug.

Mayor Ron Justice reported that the City will be aggressive at the state government level (e.g., WVDOH) during this legislative session.

Report of Solution to Stormwater Problems: Mayor Ron Justice shared his efforts 1) to obtain funds (State: Sen. Michael Oliverio) and 2) to partner with WVU (Health Sciences Center: Ron Bane) and County Commission (MPO: Chet Parsons). Over $3M of the $6M needed for project has been identified. The City is pursuing a swap of properties for the land at the intersection of Van Voorhis-Burroughs needed for a stormwater detention facility; other properties needed for detention facilities are public land. Ron commented 1) that the City is the point player for the project, 2) that all project partners, including WVDOH, are identifying their roles in the stormwater runoff problems and their solutions (county zoning), 3) that the delays in MUB’s schedule for project is concern to City (designer now contracted), and 4) that the strained relationship MUB has with public is being addressed by City.

Report of Solution to Stormwater Problems: Michael Oliverio shared with the SNA an overview of the efforts that he has pursued to provide support to the MUB to obtain funds for the mitigation of stormwater problems in Suncrest. In return, Michael was informed of some general concerns from SNA members, including the need for MUB to be more two-way responsive to questions from the residents and more receptive to ideas from the residents. Some specific concerns expressed were 1) the current all (wait for $6M)-or-nothing approach to the stormwater mitigation project is questioned; this approach for more than a year has yet to eliminate any of the main threats from the stormwater problems in Suncrest, and 2) the proposed use of berms along the sides of streets so that the roads can become flow channels for excess stormwater is flawed. This use of berms will flood roads that need to be accessible for emergency vehicles. Berms will also require vehicles to slow down, creating all-year-long traffic hazards as vehicles enter and exit these streets. Such excess stormwater should be detained by larger upstream detention facilities than proposed by MUB so that roads need not be used as flow channels.

Report on Stormwater Mitigation Project: Jim Green, General Manager of the MUB, informed the SNA that his schedule would not permit him to make a scheduled one-year status report to SNA on the Stormwater Mitigation Project. Ed Sneckenberger provided three project updates on 1) the design aspect, 2) the funding aspect, and 3) the partnering aspect. First, the final report by Strand, a hydrologics consultant, will soon be submitted to the MUB. It was noted that this study was used by the MUB to specify its stormwater mitigation plan for Burroughs Run and Poponoe Run in Suncrest, a plan that differs from the preferred plan proposed by the SNA. Second, the one appraisal that the MUB obtained for the Kiger-Green properties at the intersection of Van Voorhis Road and Burroughs Street was $1M more than the MUB had estimated in its stormwater mitigation plan. It was questioned why the MUB obtained only one appraisal, and why the appraised value was so high for property essentially in the flood plain. Third, the indication from Jim Green was that the MUB was holding meetings with WVU, WV DoH and WV DEP to seek their being partners on the project. It was remarked that the MUB needed to be more aggressive in its pursuits to partner with Mylan and the WV legislators. Ed also commented that the MUB claims its ability to borrow funds for the flood mitigation project have been delayed due to the need for the MUB debt service to defend its water and sewer rate increases before the PSC. 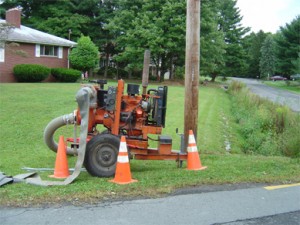